Day 14: Caernarfon to Penmaenpool. This has been a day of castles:

A fine ice-cream and coffee at Cadwalladers with one of the best views in the world out to sea. Then on to Porthmadog, Criccieth and Barmouth.

Managed to just miss out on a heavy shower (sheltering with a coffee in a beach-side cafe), before crossing the Barmouth toll bridge and following the former railway line inland to Penmaenpool. Herons agogo in the estuary and a great hotel room in the former station - axed by Dr Beeching half a century ago. Paul reckons this has been our best day's cycling yet: he's right, but don't tell him!' 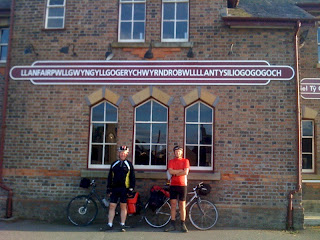