After our 83 mile epic on Saturday, we made it to the home of Lee and Dave Thorneywork, their grown-up children Matthew, Ellen and Dave's mother Betty, at the base of the Mendip Hills. Dave was a West Midlands officer based at Solihull and then Steelhouse Lane police stations, before he transferred to Avon and Somerset Police from where he retired in 2008. Before he married Lee, she had been nanny to comedian Jasper Carrot's family.
Anyway, Lee and Dave provided Paul and Mark with food, lodging and (of course) too much beer! Then on Sunday morning, after a fine breakfast cooked by Betty, Dave joined the boys on their cycle through Somerset to Bridgwater. Glorious sunshine and once they had climbed into the Mendips, fine views across the Somerset Levels.  They stopped for a light lunch in the City of Wells, dining al fresco in front of the Cathedral - the area more recently renowned as the scene of the 'bloodbath' at the end of the movie, 'Hot Fuzz'!

In Glastonbury, well known for its Arthurian connections and 'alternative' culture, the boys tucked into tea and cake before heading west across the Levels and bird reserves to Bridgwater.  Lee joined them for great tapas, beer and footie on the hotel bar TV, before returning to Wrington by car with both her husband and his bicycle on board.  Only 41miles covered today, but the most relaxing and enjoyable day's cycling of the trip to date.

The below photograph shows Dave Thorneywork with Robbo and a distant Glastonbury Tor behind them. 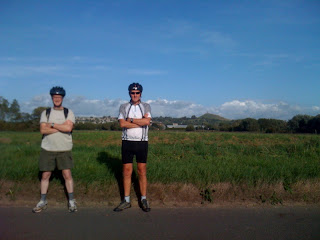