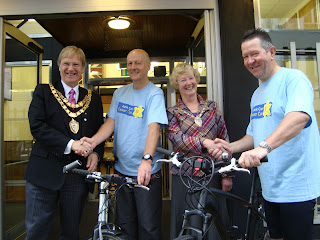 The Mayor of Solihull, Ian Courts shakes hands with Paul and Lady Mayoress Sheila Courts with Mark, on their return from completing the 1,050 mile cycling odyssey 'The Long Hard Way' from John o' Groats - Lans End.
Monday 20 September and despite the best efforts of several rail companies, Robbo and Stokesy are now safely home.  Paul has returned to the busom of his family and the daily school run as a retired DS.  Mark to Force CID - at least for the time being and pending the result of the Government Spending Review.

The boys discovered at Newquay railway station on the penultimate day's cycling that the reason why their calls to Mumbai, India (they kid you not!) had failed to secure bike reservations for the return journey from St Ives to Birmingham, was due to engineering work in 'the Bristol area'.  The poor guys at Mumbai had not been told this.  Nevertheless and despite the cancellation of the second train on Saturday morning (forcing them aboard the 'Sardine Express' to Plymouth), the return leg was problem free.  However, the whole issue of taking bikes on trains in Great Britain can be described at best as problematic, with each rail company operating a cavalier selection of rules.  When these work it's great, but when they don't... And let's not delve into a fare charging structure that makes it cheaper (by some £35 each in their case) to split the journey in two and buy separate tickets, even though they were travelling on the same train!

To be fair, the outward journey from Birmingham International to London Euston and then by sleeper to Inverness, had worked like the proverbial dream - well oiled by the on-board bars, fine meal and some excellent company in the form of Hugh Fullerton-Smith, director of the European Nature Trust based at Dornoch in Sutherland.  His take on conservation issues in Scotland and beyond was both highly interesting and profound.
Posted by robbo and stokesy at 23:57