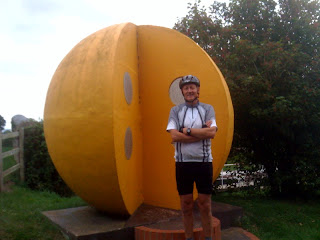 Two Big Cheeses?  No, actually it's Robbo standing in front of a scaled-down representation of the Sun on the Bridgwater and Taunton Canal.  As you cycle along the towpath you pass similar models of the Planets - or at least those that haven't been nicked!  ﻿
﻿
﻿
By 6.30 pm this evening we had crossed the border into Devon and reached the village of Bickleigh on the River Exe. 886 miles covered since we left Wick (849 from John o' Groats).

Stokes's 'Stealth Bike' required a bit of a service first thing (trouble with the pedals as it turned out) followed by a puncture mid-afternoon. Some route-finding issues in Taunton town centre, although most of the day was spent on canal towpaths - the Bridgwater and Taunton and the Great Western to Tiverton, the cleanest canal ever witnessed and scores of wildfowl to boot - Ducks, Moorhen and 'Robbo Birds' (Coots, as in bald as a!)...

After Tiverton and with rain threatening, we called it a day at Bickleigh and checked-in at the pub bed and breakfast. 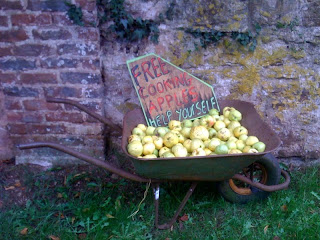 Spotted on the Somerset/Devon border!  Now there's a heart-warming example of generosity.
Posted by robbo and stokesy at 20:13